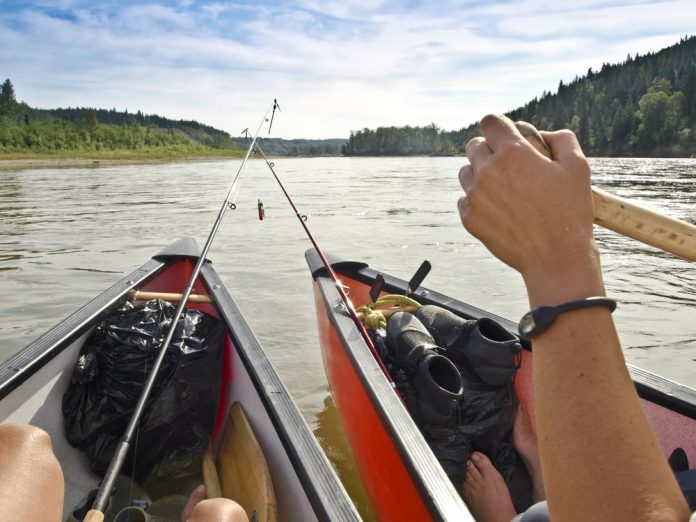 One problem which often pops up when people are looking for the best small boat to take fishing is whether a kayak or a canoe is better. We thought we’d give our opinion on the matter and weigh in with a quick comparison of the essential key points for each of them.

In this comparison, we’re going to be taking a look at the general movement of the kayak and canoe, the stability of each of them, the weight and storage capacity you can expect, speed, and much more. We’ll examine each of them and come to a final conclusion about which is the best for you to take out when fishing!

Let’s get started by taking a quick look at the agreed definition for both kayaks and canoes, in case you need a refresher about the differences between the two and what kind of performance you can expect to see.

Traditionally, a kayak is a narrow watercraft that’s usually propelled by a double-bladed paddle. They’re often used for fishing because of how easy they are to manoeuvre and their versatility on the water.

Kayaks usually have a covered deck and one or more cockpits. What differentiates a kayak from a canoe is the fact that the cockpit can sometimes be covered by a spray deck (preventing water from waves or spray entering). 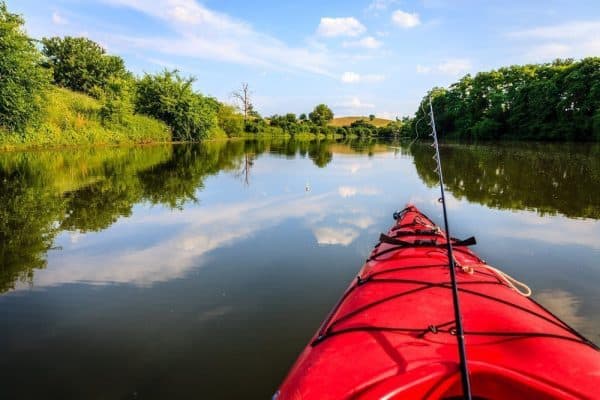 Some modern kayaks have different structural designs, such as seating the paddler on top of the boat (“sit-on-top” kayaks), or making use of inflated air chambers around the exterior of the boat. Some kayaks even come with twin hulls instead of the traditional solo hull. Some kayaks even have alternative propulsion methods than the paddle, like pedal operated or small onboard motors.

Here are some of my favorite sit on top fishing kayaks.

Canoes are generally pointed at both ends of the craft and open on top. They are propelled by one or more paddlers using a single-bladed paddle. They’re great for fishing because of the open top, which has plenty of options for storing gear.

Most modern canoes are made of molded plastic or composites like fiberglass. They’re strong, durable, and can handle quite a lot while out on the water. Much like kayaks, some canoes have other propulsion methods like small motors. There are many different designs for canoes but for the most part, they’re all fairly similar.

Now that you’ve got a better idea about each of these small boats, let’s dive right into our comparisons. If you’re in a rush and just want to check out specific points about each of them, simply head to the section that has the information you need and then take a look at out our final conclusion.

The movement and method of propulsion is different for each craft and could affect your fishing trips. As previously mentioned, a kayak usually uses a two-bladed paddle that can be balanced across the cockpit or fastened to the deck when not in use. To move around while you’re fishing in a kayak, you would have to put down your fishing pole and pick up the paddle, so it can be quite a tricky affair the first few times you try it out. 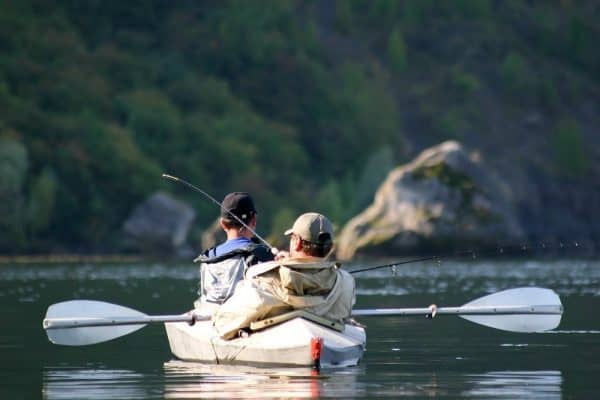 Canoes are usually propelled with a single-blade paddle. Because of the open deck, however, it’s much easier to switch between the paddle and your fishing rod when you want to move. As we mentioned earlier, motors can be added to both of these crafts if you want an easier method of propulsion.

In general, the canoe is much safer and secure than a kayak when fishing. The wider build and the open top make it much safer to move around more freely in and offer up an easier route of escape if it happens to roll over in the water.

Although kayaks are perfectly safe when used by someone who has experience with them, rolling over due to lack of stability in one is something that can happen. Because of the closed top, this does prevent some dangers to the inexperienced.

Sit-on kayaks can help you avoid the unfortunate experience of becoming trapped during a roll in the water. On the whole, though, the kayak is still far less stable than the canoe when a new user takes it out on the water.

In general, kayaks are lighter and can handle a lighter load than canoes. If you’re heading out on a kayak, you want to pack as light as possible. With a canoe, you’re afforded much more freedom regarding the amount of gear you can pack in and the weight it can support.

Different models of canoes and kayaks have different load-bearing capacities, so make sure to check out the specifications before making any kind of purchase. This information will usually be easy to find. Something you can do beforehand is weigh your equipment and see what kind of range you should be aiming for.

Neither a kayak or a canoe has any significant advantages over the other in terms of carrying capacity. In general, the differences are purely to do with how things are stored and carried. Although canoes can generally handle more gear.

Kayaks usually make use of covered wells and elastic cords to hold equipment in place while you’re paddling. These wells help to keep your fishing equipment safe and dry. Canoes, on the other hand, have open decks – so your gear can just be placed at your feet or around you (whenever needed). Whatever craft you use, it’s important to make sure that everything is secured properly at all times. 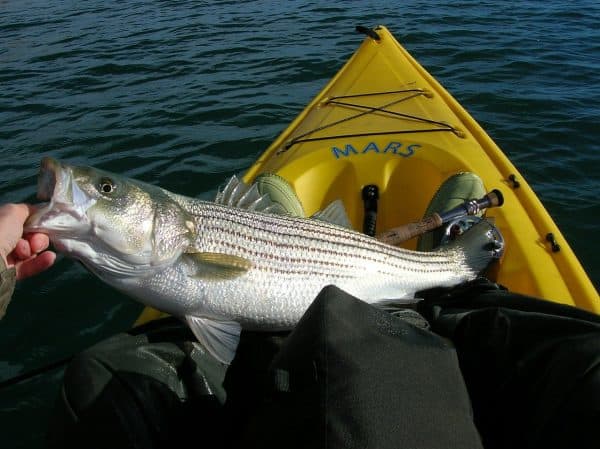 Rod holders are an essential part of your fishing gear, for both canoes and kayaks. Look for ones that are easy to adjust (from horizontal to vertical) and simple to fit and maintain. Kayaks can usually have them permanently attached to the outer hull, although some models require a little DIY.

When it comes to the actual fishing equipment you need to bring with you, minimal is the general rule you should try and follow. This is just common knowledge. Make sure whatever craft you’re looking to buy has enough room for the bare minimum and all of the essentials that you’ll need on your trip.

While both of these small boats can reach a decent speed when you’re trying, the sleek build and overall lighter weight of the kayak makes it faster than the canoe (if only paddles are being used). This can be extremely beneficial when fishing, as you might want to move between spots quickly or get to certain areas at the right time to catch certain fish.

Canoes can certainly build up to a decent amount of speed when being put to use properly, though. And remember, if you’re interested in a canoe but you want speed, external motors are always an option. These are relatively cheap to purchase and have fitted nowadays and they can really transform your fishing experience.

The techniques that are used when actually fishing in a kayak or a canoe is something you need to contemplate when deciding which one is best for you. When you’re standing up and casting from a regular boat, you tend to use your whole body. This is especially true when you’re actively setting the hook and reeling a fish in.

From a canoe or kayak, however, you can only use your arms and shoulders to complete these tasks. Being in a kayak also means having to use a slightly different cast technique than when in a canoe, as you’re much closer to the water and have to use much less of your body to cast and reel in. 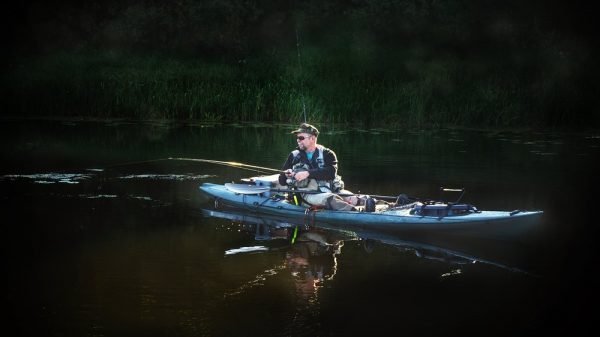 In general, there’s no way around figuring out this new technique – you just have to give it a shot and see what works for you. There are a few ways to make it easier, however. Namely, trying out a rod with a slightly longer handle. The longer handle will keep the reel further away from the end of the rod holder and make it easier to grab when a fish bites.

When you’re so close to the water, a long handle and a shorter rod can produce some brilliant results, whether you’re in a kayak or a canoe. Just ensure that you don’t make the cast and reel too forcefully and risk tipping over.

The process of anchoring a small craft like a canoe or a kayak is fairly easy, and not something that should really weigh into the final purchasing decision. If you’re out on fairly calm water, you shouldn’t need to worry too much about drifting too far away from your fishing spot.

If there is a little movement and you do want to anchor, you can easily use homemade anchors while fishing (such as sand in a plastic jug) or purchase the proper equipment. The logistics and usage remain pretty much the same for both a kayak and a canoe.

Which Is the Best for You?

It’s hard to say exactly which craft is best for you, as we don’t know exactly how you’ll be using it and what kind of boat you prefer. Both the canoe and the kayak offer distinct advantages, depending on how they’ll be used.

If you like to head out on solo fishing expeditions, then the kayak might be the better option for you. Whereas, family trips (or heading out with friends) might be best undertaken with a larger canoe that you can all fit in!

The open design of a canoe allows you and the other passengers to freely change your position throughout your fishing trip. This certainly makes it better suited for longer duration expeditions. Time spent out on the water is something you have to consider. A short trip, for example, might be best taken in a small, single-seated kayak.

Something that you could do before making a purchase is hiring out both a kayak and a canoe (on separate days) and get a feel for how they both work on water. Become accustomed to them both and try and see which one you feel most comfortable in.

Take some time to try out your fishing technique in each of the boats and pay attention to which feels most natural and which one you get the best results in. It also pays to ask around and see what other people who fish the same areas as you prefer. This is always a good tactic with any fishing purchase, as locals will always know the location (and what works best there) better than anyone else!

Weigh up all of the options before deciding and really take into account each of the sections we’ve addressed above. Decide what points mean the most to you and base your decisions on how you’ll be using the craft and what you expect to get out of it. Remember to consider the stability, how fast you want to move, and all of the key components that we’ve spoken about above.

Kayaks and canoes both offer fun and eco-friendly ways of getting out on the water and enjoying some fishing. The final decision comes down to you and what you’re looking for. Whatever craft you choose, we hope you have an amazing time out on the water! 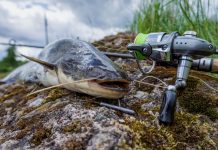 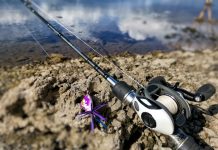